The A380 is the world's largest plane. Photo by Qatar Airways.

Qatar Airways is looking to make a big splash on its maiden voyage from Doha into Atlanta, last week revealing plans to land in style with the world’s largest jet, the Airbus A380.

Although the daily flight starting June 1 will normally employ the Boeing 777, the airline is using its newest flight to showcase one of its six A380s for the first time in the United States. Qatar Airways has 10 destinations in the U.S., but none of them is scheduled with A380 service. 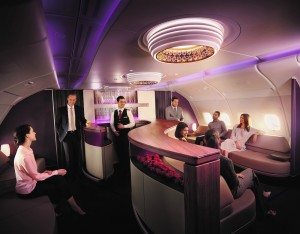 The mammoth, double-decker aircraft is outfitted to include eight first class seats, 48 in business class and 461 in economy. It also includes a lounge with a bar for premium passengers.

Qatar Airways Group Chief Executive Akbar Al Baker, who has had more than one public spate with Delta Air Lines Inc. CEO Richard Anderson denigrating the service of Atlanta’s hometown airline, said in a statement that Qatar wanted its customers to experience the best on its Atlanta launch.

“The Qatar Airways A380 provides a memorable experience for our passengers, with a spacious double decker layout, refined finishings, customized interiors and convenient design. We look forward to welcoming our passengers to and from Atlanta on our inaugural flight on June 1, but also on every flight thereafter. We look forward to serving the global travel needs of the people of Atlanta,” the statement reads.

Qatar won the Skytrax “Airline of the Year” in 2015 for the third time, along with an acknowledgement for having the best business-class seats in the world.

Qatar is a member of the oneworld airline alliance, which means customers should be able to book onward travel to American Airlines destinations from Atlanta. In the other direction, the Middle Eastern carrier is also looking to enhance one-stop access to India for travelers departing from Atlanta.